Fire in the White Stone 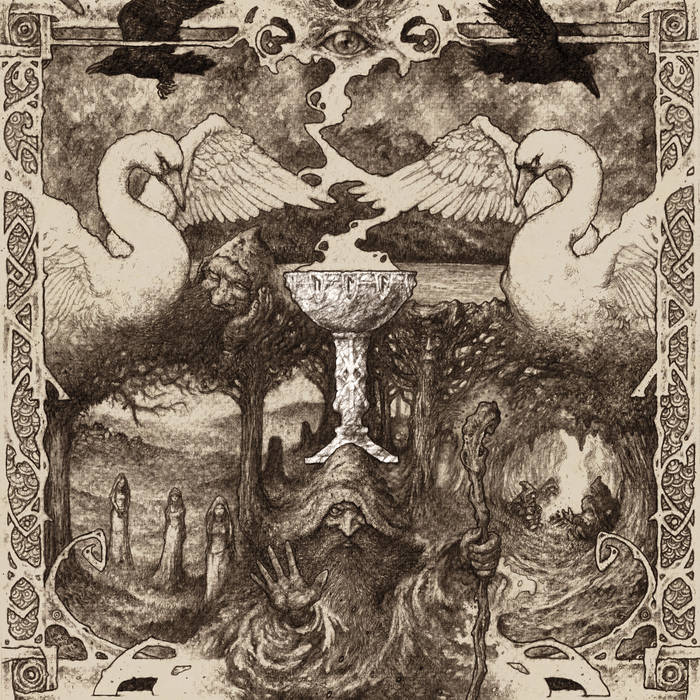 Grey Wanderer Everything Wolcensmen does is fantastic!

Arrogant Bastard Wolcensmen is the pagan, neo-folk side project of Winterfylleth's Dan Capp. An uplifting, yet haunting experience as it conjures images of snow engulfed forests traversing the ancient ruins of religions long forgotten.
It's also NYP, pick it up now! Favorite track: Lorn and Loath.

I am Black Hill

Following the success of the debut album 'Songs from the Fyrgen' (reissued in 2018 by Indie Recordings), Wolcensmen is back with the highly anticipated sophomore full-length, 'Fire in the White Stone'. 11 brand new dark folk hymns of a mythological nature.

For this new offering, no effort was spared. The project's mastermind, Dan Capp (also of Winterfylleth), forged a story, crossing traditional archetypes with his own philosophical explorations, and then set about composing a concept album using new and archived musical ideas. To fully realise his folk-tale, Dan then wrote a 12,000 word short-story – his first, to accompany the music and making this an elaborate, unique release.

“As a listener, I prefer the journey of a cohesive album, and as a writer I prefer to have some kind of larger framework for my lyrics.” – Dan Capp

‘Fire in the White Stone’ is a timeless tale of mystery and destiny, in the spirit of Tolkien, Wagner and the Grail mythos (influences which Dan wears plainly on his sleeve). A hapless young man breaks away
from home and flees into the wild, forsaking companionship and comfort. He is subjected to a stream of extraordinary happenings, encountering among other things 1 mysterious old man, 2 unusual swans, 3 ghostly maidens and 4 dwarf-like beings. Against this otherworldly backdrop, Wolcensmen’s music and lyrics convey the emotions and atmospheres of a multi-layered story.

In the pursuit of evocative, immersive atmosphere, John A. Rivers - known for his work with Dead Can Dance - was hired to produce the album and did so with flare. Also featured are contributions from Jo Quail (cello), Aslak Tolonen of Nest (kantele) and Jake Rogers of Visigoth/Gallowbraid (flute), among several others. Furthermore, French master David Thiérrée was chosen to illustrate the story for the cover art.

“Wolcensmen is all about atmosphere, and when I think of the most atmospheric recordings I’ve ever heard, the first that comes to mind is ‘Within the Realm of a Dying Sun’. I remember first hearing it, and that feeling of almost being able to step inside of the mix, as spacious as it is. So John was really the holy grail of producers as far as Wolcensmen is concerned, and I’m very grateful to have worked with him on this album.” – Dan Capp

'Fire in the White Stone' refines the epic nature of Wolcensmen's previous work, bringing together classical guitar, cello, voice, synth, piano and percussion to build memorable songs filled with tension, drama and emotion. Care was taken over every aspect of the release to ensure that it would stand as a timeless testament to Wolcensmen's vision.

All music and lyrics composed by Dan Capp, except for the following notable contributions:
Synth parts in ‘Foreboden’, ‘Lorn and Loath’ and ‘The Swans of Gar’s Edge’ by Darkest.
Synth parts in ‘Of Thralls and Throes’ by Grimrik.
Flute part in ‘Maidens of the Rimeland’ by Jake Rogers.
Cello climax in ‘Sprig to Spear’ by Jo Quail.
Kantele parts in ‘Lorn and Loath’ and ‘Fire in the White Stone’ by Aslak Tolonen.

outré black metal, with a Victory Over the Sun interview and music from Liturgy and Jute Gyte.